Steve Jones is the elected Mayor and previously served as a Councilmember for the City of Garden Grove since 2007. He spent eight years prior on the Planning Commission, with three terms as Chair. He studied abroad at Kings College, Cambridge University, England and then went on to earn a Bachelor’s Degree from USC in Business Administration, with an emphasis in Marketing. He later returned to USC and earned a Master of Business Administration (MBA) degree with a dual emphasis in Finance and Real Estate Development, graduating with a 3.9 GPA and receiving honors for high scholastic achievement.

In addition to being a founding Board Member and President of the Association of California Cities, Steve also serves on the Boards of Directors for the Orange County Transportation Authority (OCTA), the Orange County Sanitation District (OCSD), as Past President of the Garden Grove Community Foundation (GGCF), and is currently President of the Town & Country Estates POA and Treasurer of the Monterey Villas HOA. Steve has been married to his wife, Manivone, and has two boys, named Jaden and Ashton. 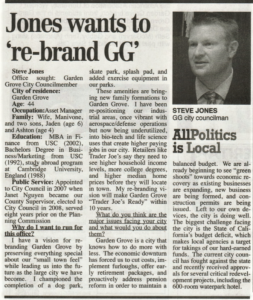 “I have a vision for re-branding Garden Grove by preserving everything special about our “small town feel” while leading us into the future as the large city we have become. I championed the completion of a dog park, skate park, splash pad, and added exercise equipment in our parks.” 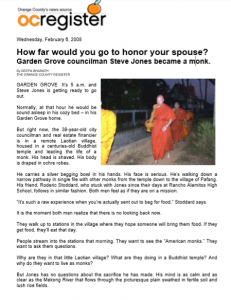 It’s 5 a.m. and Steve Jones is getting ready to go out. Normally, at that hour he would be sound asleep in his cozy bed – in his Garden Grove home. But right now, the 39-year-old city councilman and real estate financier is in a remote Laotian village, housed in a centuries-old Buddhist temple and leading the life of a monk. His head is shaved. His body is draped in ochre robes. 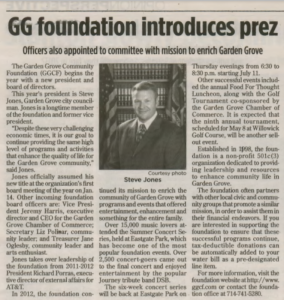 2011-2012 – The Garden Grove Community Foundation (GGCF) begins the new year with a new president and board of directors. This year’s president is Steve Jones. Jones is a long time member of the foundation and former vice president.